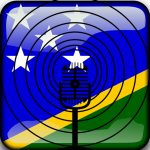 This is the 6th session of the Student Learning Continuity Program for Years 4-6, made possible by the Ministry of Education and Human Resources Development.

Topic: Family and Friends – Looking After Our Environment

Before old Mana died, he took his sons to the forest behind the Village. “I do not have much to give you except this land. I will split it between the two of you”. He showed his sons a boundary that divided the land. Garry, the eldest, received the land east of the boundary. His second son, John, had the land on the West side.

“Look after this land. It has provided our family with crops and building materials. It is our hunting ground”, said Mana.

Later, a logging company visited the village. The company offered money to landowners if they allowed the company to cut down trees for timber. Garry said, “Yes” and took the money. John refused. Six months later, the trees on Garry’s land had all been cut down. The company moved on to the next Village. Garry used his money to build an iron-roofed house. He bought a water tank, a generator and a video. Then his money run out. He could not buy food from the shops. His family became hungry. The loggers had destroyed his gardening land. He went to John’s house and saw bags of taro and potatoes. John was busy cleaning the wild pig he had caught in the forest. Garry had to beg food from John to feed his family.

Vocabulary for Years 4, 5 and 6: Fill the blanks in the 4 sentences below using these words:

Hint: To find the perimeter of a shape, add all the distances around it.

If Garry’s land area is 10 metres by 16 metres and John’s land is 8 metres by 13 metres, what is the total land area for both Garry and John?

Hint: Use the formula to find area (length x width) for each one, then add them together.

Year 6:  The logging company cut down all the trees on Garry’s land within six months. Garry received an amount of $140,000 for logging his land. He then shared the money equally with his wife, his three children and himself. What would be the total amount of money given to each person?

Year 4: The loggers have cut down all the trees and destroyed the home of some animals and plants that they depended on as food. What are three types of animals that can be found in the forest?

From the text- Old Mana’s Land, Six months later the loggers cut all the trees on Garry’s land.

In year 5 you  learnt  about three consumers: Herbivores, Carnivores and Omnivores

Year 6: From the text, Old Mana told his two sons to look after the land. The land has provided their family with crops. People produce many crops for many reason.

For further information, you can contact us on: 28803/28804 and ask for either; Mr. Gideon Sukumana, Ms Janedal Baeto, Mr Wilson Aumanu, and  Mrs. Christina Rore at MEHRD, Tongs Building, and Honiara.

Prev 3 June: Session 5 Literacy, Social Studies and Health Education
Next 17 June: Session 7 – Looking After Our Environment
No comments yet! You be the first to comment.